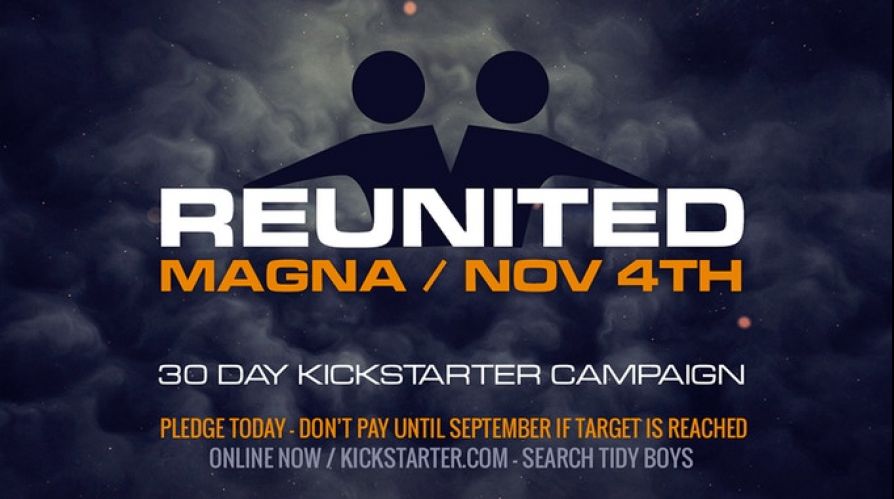 TIDY BOYS REUNITED / MAGNA / NOVEMBER 4TH 2017
The Tidy Boys and the Tidy brand have been a big part of many peoples lives over the last 22 years. The worlds biggest Hard House brand has created a clubbing community like no other with the passion and love for Tidy (and its creators Amadeus Mozart & Andy Pickles aka the Tidy Boys) still strong, the demand for big special events is always in high demand.

So, could the Faithful make a big Tidy event happen again? Could there be a special party where the Tidy Boys come out of retirement to be reunited for one night only? Well, there is one venue that is always mentioned and holds a particular special place in Tidy's history. A very special venue that is synonymous with the brand and the boys - MAGNA. Tidy's biggest ever party took place there with over 5000 people attending Magna 7 in 2003, but Is there enough people to make this happen again… can we Kickstart something special once more?

The Event : The Tidy Boys Reunited at Magna in Sheffield would take place Saturday November 4th 2017. A fun packed concert style show with full production in one massive arena for one night only. A 3 Hour Tidy Boys set plus special guests and surprises. This would be the Tidy Boys biggest night out EVER... and you could be a part of this historic event; remember, there's no party like a tidy party...

A full theme and more details would be given only if the target is reached. You have just 30 days to get your tickets via a pledge on the Kickstarter project. 2000 ticket sales (which equites to a £85K) will make this event happen and If we don't hit the target in 30 days, then we can just put this down to a fantasy dream that never happened.

Don't forget, no money will be taken from your account until the target is reached at the end of the 30 days. If we don't reach the target no event will happen and no harm done.

GOOD LUCK EVERYONE - SHARE THE LINK AND THE LOVE