It all started in a shed with vinyl decks 14 years ago. Since then the unimaginable has happened. After 12 months of solid practice Lucy decided to play her first gig on a table set up in a small pub in Hertfordshire. If you had told her then, that within a decade she would have been playing for the biggest Hard House brands in the world to thousands of people, touring the globe, headlining events, playing main stage weekenders and being a long standing resident for super-clubs Storm and Frantic- there is no chance she would have believed it.

Lucy Fur has not happened over night, it has taken years of dedication in a music world she adores and loves. But hard work does pay off. Once the London gigs became more frequent, people started to take notice in the early 00's.

Around 2007 the Toolbox relationship blossomed with head honcho Nik Denton and she was made the first lady of Toolbox. Since this time Lucy has released two albums, one a Toolkit featuring three of her own productions and the other Toolbox V2 which she mixed with the mega star Justin Bourne. She has had a string of strong releases including 'Shake It Up' 'One Stop Chop' and 'Rattlebrain'. 2013 sees her third album release to celebrate Toolbox's 12th Birthday and her new 'Hit The Floor' track is to be released at part of the 150th edition EP in March. Her last track release was her first on the mighty Vicious Circle label, ' Lucy In Sky With Hoovers' which has featured on the new Ideal Album mixed by BK and is a won for Best Track 2012 at the Hard House Awards.

Early 2014 saw the Fur take over of Toolbox Recordings, which has launched her further into realms of the dance world, with a string of tracks to be released- the first being May 2014. What an accolade to her.

The last five years we have seen Lucy play at the biggest events in the UK, and has been lucky enough to play main stage five times at Koko in London for Frantic's epic events. She has done numerous Ibiza Bootcamps where she is a firm favourite and is a quarterly regular in Ireland. In 2011 she toured New Zealand playing for Frantic in Auckland and Hardbeat in Wellington where she left an impression musically and personally. Alongside all this she doesn't miss playing for the Best Club Night 2010 and 2011 at the Hard House Awards, Storm. Lucy became runner last year to legend Karim as Best Resident for Storm and this year she took the title and won Best Resident for 2013.

In March 2011 Lucy closed the main stage at the infamous Tidy Weekender Reunion event which was said by many, to be the set of the weekend. Clips of this set on YouTube have reached over 3000+ hits. Lucy was welcomed back to play the Xmas Tidy Weekender in December of 2011 where her mix made the Live Tidy Album which was released early 2012. More recently continuing with new super brand 'Ideal', she has been made part of the Ideal DJ Team alongside great DJ's such as JP & Jukesy, Kirsty Lee James & Paul Maddox.

Who inspires Lucy Fur? We asked her-
'My sound inspiration definitely comes from early clubbing days watching Lisa Lashes & Andy Farley for hours and then I discovered the harder edge sounds of Paul Glazby. Hoovery energetic hard house is my absolute passion and it went from there. Being able to play a rare b2b set with Glazby at Storm Fright Night 2011 before his official retirement was a dream come true.' Lucy is very fortunate to be booked for her energetic, driving fun sound which sees her play peak time sets.

So what could be left for Fur? In April 2014 her album with Cally Gage for new label 'HARD' won Best Album at the HDM awards, she came runner up for her track with Kirsty Lee James 'Escalator' on Vicious Circle and Lucy herself was voted the number 1 'Best Hard House DJ' 2014. It really cannot get any better than this! 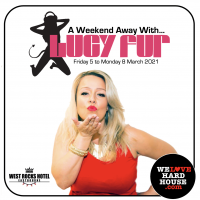 A Weekend Away With Lucy Fur