Hard House enthusiasts will already know the mighty JP & Jukesy; their impressive worldwide fan-base lap-up precision-delivered jaw-dropping sets. Perhaps what makes the duo so popular and so successful is that they are natural born clubbers. A chance meeting through a mutual friend some seven years ago whilst out clubbing at Sundissential North is where it all began. Almost immediately the pair recognised that they had complimentary musical interests; both considered (and still consider) Andy Farley as being inspirational in their clubbing lives; both had taken a keen interest in DJing and both enjoyed their hobby as bedroom DJs. JP and Jukesy hit it off instantly.

Regular appearances at some of the UK's and overseas dance events quickly became the norm; home territory based from legendary gigs at Tidy Weekenders, Atomik Weekenders, Frantic, Polysexual, Slinky to international dates from Norway to Australia and everywhere in-between. Their addictive energy and obsession for their work is amplified where-ever they play; brilliantly delivered chunky warm-up sets, or hands in the air euphoric peak-time performances through to high-placed no holes-barred full on closing slots, JP & Jukesy's versatility ensures that they compliment any line-up; they are consistent in delivering crowd pleasing expertly mixed well considered play lists

But DJing is just part of the JP & Jukesy story. Despite a packed diary, the lads have an impressive back-catalogue of production credits. Following their first successful releases on Passion Records (How I feel and H-Bomb both supported by DJs such as Eddie Halliwell and Amber D) they decided to launch their own labels Deprivation, Deprived of Funk & Deprivation LTD. Releasing via their own label and through big name commissioned work, they are also regularly asked to remix other producers tracks; listen our for the JP & Jukesy mix of BK's Rave Monkey which is tearing up dance-floors across the UK and globally at the moment!

2009 has seen the duo notch up another major milestone; they've been signed to the scene-leaders Chic Management and join the likes of Tidy Boys, Rob Tissera and Sash on the star studded top flight roster. Where do JP & Jukesy go from here? Who knows; their meteoric rise has hard-dance hero's continues to see the duo pick up huge swathes of fans; from the tens of thousands of clubbers they play to every year, to the promoters who know JP & Jukesy's inclusion on a line-up is sure to be a winning contribution to the success of an event, there is one thing that is certain – JP & Jukesy are a formidable force in hard-dance that will be around for a very long time. 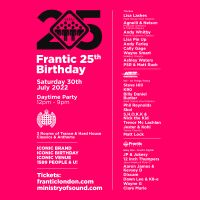