Jamie Tennant is an established Underground DJ, mixing Trance, Hard Trance, Hard House & Hard Dance since 2002. He has played in various places over the UK for various events such as ,Tasty, Total Mayhem, Sunnyside Up, Xtatic, Just Groove, Primetime, Zoology, Totally Twisted, Flashbak, Vital, Sundaze, Shining, Summit, Vinyl Impact, Alumini, Limelight, Unified & Premition to name but a few!!! He has also played a Funky set in Portugal in 2009 and since then played at Distorted frequnencie (festival) & playing out in Ibiza was a big highlight.

Jamie used be a co promoter/Resident for a party called "Primetime" for 10 years which is now in to it's 13th year and which he is still a resident for, and over the years It's had some of the best underground Dj's the scene has had to offer : Skol, Roosta, Muzz, Carl Nicholson, Marc French, Matt Rush, Andy McCall, JK, Tony Kaos, Double Trouble, Hemlock, Aaron James, Kevsey D, Andy Simpson, Simon the Fireman, PSR, Pez and many more. 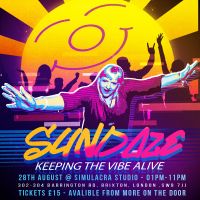