Daniel was there from the beginning of "Dance" culture. Starting his 23 year DJ journey with seminal London party Labrynth / 2000AD where he remained resident every Friday & Saturday night for 5 years until 1995, playing the ever progressing sounds of Dance Music.

Throughout the mid 90's Billy "Daniel" Bunter wowed fans at the "UK's" most iconic Rave Parties: World Dance, Dreamscape, Helter Skelter, Raindance, Slammin Vinyl, Rezurection, United Dance, Desire, Hardcore Heaven to name just a few. In the later 90's to mid 2000's Daniel found him self pioneering "Hard Dance" and rocked the scenes favorite events Frantic, Sunny Side Up, Heat, Twisted, Slinky, Sundisential, Pendragon, Freedom, Bounce 2 This, Tasty et all. As well as taking the "World" by storm: Asia, North America, New Zealand, Australia and the whole of "Europe" were all shaken to the foundation by the energy of Billy "Daniel" Bunter.

As music radically changes, Daniel is always at the forefront of both the Old Skool & Upfront underground music scenes, and can boast being in a very privileged position, where his unique musical styles and 2 decade fan base and reputation see him play a diverse and exciting mix of the best parties in the UK from Old Skool to Jungle. Hard Dance to Hardcore: Glastonbury, Moondance, Raindance, Slammin Vinyl, Fantazia, HTID, Frantic, Epidemik, Kool, Champion Sound, Innovation, Compulsion, Labrynth, Desire, Tasty, Diztruxshon, Hyperbolic, Slip Back In Time, Uprising, High Definition Festival, Bestival, Rhythms Of The World Festival, Retro Trax Festival, Boom Town Festival, Fantasy Island, Dreamscape, Innovation In The Sun, Sundance Festival, Jungle Fever, Pure Science, This Is Bass and 100's more the world over continue to be entertained by Billy "Daniel" Bunter.

Daniel's DJ ethos is simple. Get the party jumping, and give the dance floor goose bumps with tune after tune.

23 years speaks for itself and the secret is in Daniel's presence behind the decks, intense mixing flow, and natural instinct to select the next tune that makes the crowd go wild. 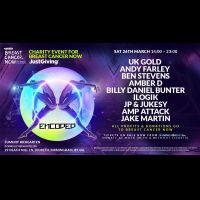